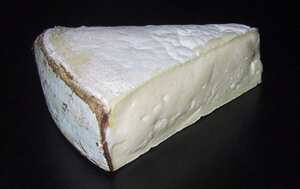 One is a soft, rich, seasonal cheese [August to the end of March] contained in a grayish-yellow blanched rind and called Vacherin Mont d'Or. Made from cows' milk in Switzerland or France, usually in villages of the Jura region (an origin that has been officially controlled since 1981), it typically contains 45 to 50 percent milk fat. It is marketed in a round wooden cheese-box and can be served warmed in its original packaging and eaten like a fondue.

The other Vacherin, a firmer cheese, is called Vacherin Fribourgeois. It is made in the Fribourg canton of Switzerland where Gruyère originates and has a slightly acidic, resiny flavour, with a varying strength depending on the age and type. It is also a basic component lending character to fondues (depending on the recipe).

If the Vacherin cheese is not listed below, select a similar type of cheese from the list below to get a rough idea for the number of calories in Vacherin cheese.