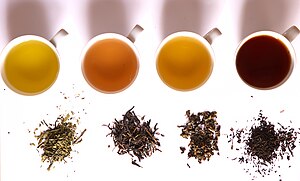 The traditional method of making or brewing a cup of tea is to place loose tea leaves, either directly or in a tea infuser, into a tea pot or teacup and pour freshly boiled water over the leaves. After a few minutes, the leaves are usually removed again, either by removing the infuser, or by straining the tea while serving.

Most green teas should be allowed to steep for about two or three minutes, although some types of tea require as much as ten minutes, and others as little as 30 seconds. The strength of the tea should be varied by changing the amount of tea leaves used, not by changing the steeping time. The amount of tea to be used per amount of water differs from tea to tea, but one basic recipe may be one slightly heaped teaspoon of tea (about 5 ml) for each teacup of water (200–240 ml) (7–8 oz) prepared as above. Stronger teas, such as Assam, to be drunk with milk, are often prepared with more leaves, and more delicate high-grown teas such as a Darjeeling are prepared with somewhat fewer (as the stronger mid-flavours can overwhelm the champagne notes).

The higher temperatures are required to extract the large, complex, flavourful phenolic molecules found in fermented tea. In addition, boiling reduces the dissolved oxygen content of water. Dissolved oxygen would otherwise react with phenolic molecules to turn them brown and reduce their potency as antioxidants. To preserve the antioxidant potency, especially for green and white teas brewed at a lower temperature, water should be boiled vigorously to boil off any dissolved oxygen and then allowed to cool to the appropriate temperature before adding to the tea. An additional health benefit of boiling water before brewing tea is the sterilisation of the water and reduction of any dissolved VOCs, chemicals which are often harmful.

Some tea sorts are often brewed several times using the same leaves. Historically in China, tea is divided into a number of infusions. The first infusion is immediately poured out to wash the tea, and then the second and further infusions are drunk. The third through fifth are nearly always considered the best infusions of tea, although different teas open up differently and may require more infusions of hot water to produce the best flavour. To keep the temperature of the tea in a teapot a tea cosy is often used.

One way to taste a tea, throughout its entire process, is to add hot water to a cup containing the leaves and after about 30 seconds to taste it. As the tea leaves unfold (known as "The Agony of the Leaves"), they give up various parts of themselves to the water and thus the taste evolves. Continuing this from the very first flavours to the time beyond which the tea is quite stewed will allow an appreciation of the tea throughout its entire length.

Antioxidant content, measured by the lag time for oxidation of cholesterol, is improved by the cold-water steeping of varieties of tea.

In the West, water for black tea is usually added near the boiling point of water, at around 99 °C (210 °F). Many of the active substances in black tea do not develop at temperatures lower than 90 °C (194 °F).[citation needed] Lower temperatures are used for some more delicate teas. The temperature will have as large an effect on the final flavour as the type of tea used. The most common fault when making black tea is to use water at too low a temperature. Since boiling point drops with increasing altitude, it is difficult to brew black tea properly in mountainous areas. It is also recommended by the British that the teapot be warmed before preparing tea, easily done by adding a small amount of boiling water to the pot, swirling briefly, then discarding it. Western black teas are usually brewed for about four minutes and are usually not allowed to steep for less than 30 seconds or more than about five minutes (a process known as brewing or mashing in Britain). In many regions of the world, however, boiling water is used and the tea is often stewed. For example in India, black tea is often boiled for fifteen minutes or longer as a strong brew is preferred for making Masala chai. When the tea has brewed long enough to suit the tastes of the drinker, it should be strained while serving. Popular varieties of black tea include Assam, Nepal, Darjeeling, Nilgiri, Turkish and Ceylon teas.

Water for green tea, according to regions of the world that prefer mild tea, should be around 80 to 85 °C (176 to 185 °F); the higher the quality of the leaves, the lower the temperature. Hotter water will produce a bitter taste. However, this is the method used in many regions of the world, such as North Africa or Central Asia, where bitter tea is appreciated. For example, in Morocco, green tea is steeped in boiling water for 15 minutes. In the West and Far East, a milder tea is appreciated. The container in which the tea is steeped, the mug or teapot, is often warmed beforehand so the tea does not immediately cool down. High-quality green and white teas can have new water added as many as five or more times, depending on variety, at increasingly higher temperatures.

Oolong teas should be brewed around 80 to 100 °C (176 to 212 °F), and the brewing vessel should be warmed before pouring in the water. Yixing purple clay teapots are the traditional brewing-vessel for oolong tea. For best results, spring water should be used as the minerals in spring water tend to bring out more flavour in the tea. High quality oolong can be brewed multiple times from the same leaves, and unlike green tea, it improves with reuse. It is common to brew the same leaves three to five times, the third steeping usually considered the best. In the Chinese and Taiwanese Gongfu tea ceremony, the first brew is not drunk at all but disposed of as it is considered a wash of the leaves rather than a proper brew.

A strainer is often used when tea is made with tea-leaves in a teapot. Some teas, especially green teas and delicate oolong teas, are steeped for shorter periods, sometimes less than 30 seconds. Using a tea strainer separates the leaves from the water at the end of the brewing time if a tea bag is not being used. However, the black Darjeeling tea, a premium Indian tea, needs a longer than average steeping time. Elevation and time of harvest offer varying taste profiles; proper storage and water quality also have a large impact on taste.

Pu-erh teas require boiling water for infusion. Some prefer to quickly rinse pu-erh for several seconds with boiling water to remove tea dust which accumulates from the ageing process, then infuse it at the boiling point (100°C or 212°F), and allow it to steep from 30 seconds to five minutes.

To preserve the pre tannin tea without requiring it all to be poured into cups, a second teapot may be used. The steeping pot is best unglazed earthenware; Yixing pots are the best known of these, famed for the high quality clay from which they are made. The serving pot is generally porcelain, which retains the heat better. Larger teapots are a post-19th century invention, as tea before this time was very rare and very expensive. Experienced tea-drinkers often insist the tea should not be stirred around while it is steeping (sometimes called winding or mashing in the UK). This, they say, will do little to strengthen the tea, but is likely to bring the tannins out in the same way that brewing too long will do. For the same reason, one should not squeeze the last drops out of a teabag; if stronger tea is desired, more tea leaves should be used.

of tea+recipe Find recipes that contain 'Types of tea'