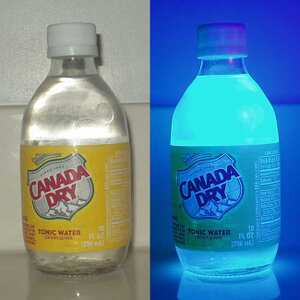 Tonic water shown on the right under ultraviolet light, quinine, even in negligible quantity, makes it fluorescent.

Tonic water (or Indian tonic water) is a carbonated soft drink flavoured with quinine which gives it a distinctively bitter taste.

The drink got its name from the medicinal effects of this bitter flavouring. The quinine was added to the drink as a prophylactic against malaria, since it was originally intended for consumption in tropical areas of South Asia and Africa where that disease is endemic. The mixed drink gin and tonic originated in British colonial India when the British population would mix their medicinal quinine tonic with gin to make it more palatable.

Medicinal tonic water originally contained only carbonated water and a large amount of quinine. However, most tonic water today contains a medically insignificant amount of quinine, and is thus used for its flavour only. It is consequently less bitter, and is also usually sweetened.