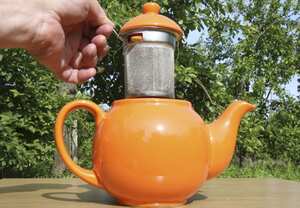 Never really a tea-man, Fairtrade Co-op teabags, milk, no sugar was my tea of choice. About one cup a week. My staple drink is freshly brewed ground coffee, black, no sugar. 5 to 8 cups a day, until recently.

Visiting a fine friend recently, he suggested 'a pot of tea', to which I concurred. He then began the tea procedure; firstly the pot was warmed, small, expensive looking bags of loose-leaf tea examined to determine the most suitable for the occasion, a tablespoon of the chosen placed in what appeared to be six inches of a stained ladies stocking with hoop at the opening. This, being placed in the pot was then covered with boiling water. During the five minutes that the stocking infused, a plate warmer, often seen at Indian restaurants, was fitted with a new, lighted tea-candle. The pot was placed upon this, the stocking removed and the procedure concluded. Well Tim, that was almost religious!

I took this tea with no milk or sugar, and it was good. Fresh, finely scented and invigorating, it also has the emotional (not caffeine) rush that you get with your first mouthful of good coffee, wine or beer. The plate warmer provided us with hot tea that was not stewed for the remainder of the morning. Ok, I'm hooked. Now lets start investigating. 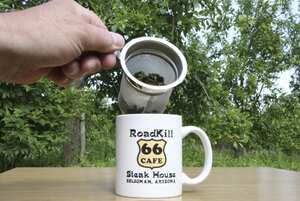 The integral strainer can also be used to make just one cup of tea.

I wanted one that included a removable infuser as loose-leaf tea is the only way to try some of the more exotic teas. Removable so I can keep the brewed tea hot for long periods without stewing it. Unfortunately, all of the glass 'modern-style' pots suffered from very poor reviews, reliability and physical breakage being the most common problem. They are also expensive. In the end, the snappily named "Bright Orange Ceramic Teapot & Infuser Loose Tea Leaf Filter Vintage Pourer Pot" took my fancy and became the first member of my tea-set.

I have no experience with exotic teas or their associated websites but after a good snout around I settled on: http://www.highteas.co.uk/ as the site was functional and fairly fuss-free, together with a good selection of tea-types. Once the site was chosen, to the teas: These were picked (sic) by type, but mainly by description; 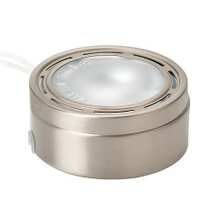 Grundtal, which will shortly be converted to be an electric tea-pot heater

I was really taken by the idea of everlasting hot tea, but a separate pot-warmer and 2 tea-candles a day seems excessive so again I sat down with Google for an hour or so. Initially I thought I'd found the solution with USB cup heaters. They do what it says on the tin, or at least you'd think they did until you read the reviews. Apart from the odd planted review, they were all derisory towards these products, not one, it seems, managed to even keep an empty cup warm, let alone a full one. Next. Well there wasn't a next, until I looked across to my Mathmos lava-lamp. Electric light, thats the answer. Ikea produce a single 12 volt 'tea-light' called Grundtal, we have them in the living room illuminating glass balls to visual effect. They easily get hot enough to keep tea warm, though it might require 15 minutes shed-work to support the tea-pot.

I'll be back with my thoughts once all of the toys have arrived and I've had a chance to taste and consider all of the teas.