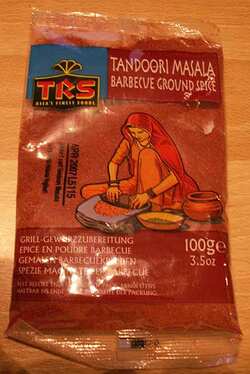 Tandoori masala is a mixture of spices specifically for use with a tandoor, or clay oven, in traditional north Indian and Afghan cooking. The specific spices vary somewhat from one region to another, but typically include garam masala, garlic, ginger, cumin, cayenne pepper, and other spices and additives (e.g. lemon juice ...).The spices are ground to a fine powder in a coffee grinder or with a pestle and mortar.

Tandoori masala is used extensively with dishes as Tandoori chicken. In this dish chicken is covered with a mixture of plain yogurt, and tandoori masala. The chicken is then slow-roasted in the tandoor. The chicken prepared in this fashion has a pink coloured exterior and a savoury flavour.

Besides tandoori chicken other dishes with chicken use this masala too. These include tikka, butter chicken etc, all of them mostly Punjabi dishes. It can be used with meat other than chicken, for example, in tandoori fish or paneer tikka.

If prepared yourself, the masala can be stored in airtight jars for up to 2 months. However, nowadays, packets or canisters of tandoori chicken masala are also readily available at major Indian supermarkets, with varying tastes depending on the brand. This convenience has led to many Indians buying the masala rather than making it at home.