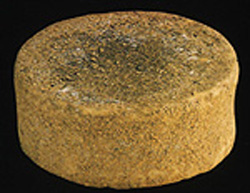 Sierra Morena is a goats’ milk cheese produced in the mountains of the same name in the north of the province of Sevilla and in the province of Jaén. Most of the goats are of the Florida breed and the cheese comes as either ‘fresh’ or matured.

The mature cheese, which usually weighs about 1 kg, is often preserved in oil to produce a stronger flavour. It has a brown rind, with a creamy white interior and holes of various sizes. It has a semi-hard and quite grainy texture and a strong goaty aroma. It has a tangy, salty and slightly acid taste.

The cheese has a cylindrical shape, and the sides sometimes have the plaited imprints of the mould in which it was made.