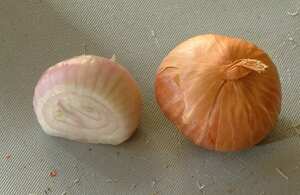 The shallot is a relative of the onion, and tastes a bit like an onion but has a sweeter, milder flavour. They are more expensive than onions and can be stored for at least 6 months.

Unlike onions where each plant normally forms a single bulb, shallots form clusters of offsets, rather in the manner of garlic.

Shallots are extensively cultivated and much used in cookery, in addition to being pickled. Finely sliced deep-fried shallots are used as a condiment in Asian cuisine. Shallots tend to be considerably more expensive than onions, especially in the United States. 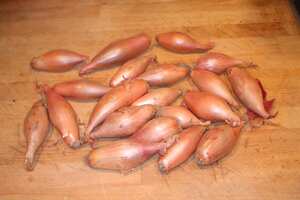 Echalion shallots or Banana shallots are a cross between a shallot and an onion. They are larger than a normal shallot, being larger in girth and also longer.

Top Michelin-starred chef Tom Aikens, chef/patron of Restaurant Tom Aikens in London explains: “Echalion, also known as Banana Shallot, are easier to peel than a traditional shallot. Echalion is the result of a subtle mixture of the intrinsic qualities of the onion and the shallot. From each one, the Echalion has retained only best qualities. These large, oval bulbs have amber-coloured skin that can be peeled back to reveal juicy, white meat that combines the ease of an onion with the sweet, subtle flavour of a shallot." 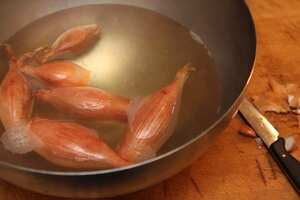 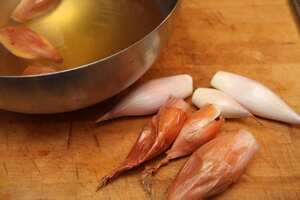 Shallots are a fiddle to peel and because they are so small to start with, there tends to be a relatively large amount of waste when preparing them. The easy way is to blanch in boiling water for a 2 or 3 minutes first, cut the root off, grip firmly from the 'leaf-end' and squeeze the shallot out of its skin.