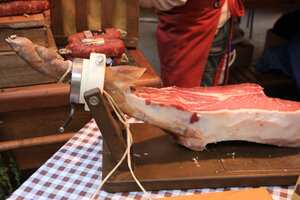 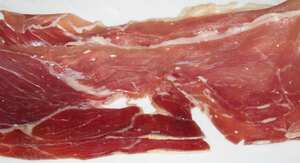 (literally mountain ham) is a type of jamón (dry cured Spanish ham), which is generally served raw in thin slices, similar to the Italian prosciutto crudo. A foreleg prepared (and eaten) in the same manner is called paleta. Jamón serrano is an 'especialidad tradicional garantizada' (ETG) product stands for 'especialidad tradicional garantizada' which in the UK is known as 'traditional speciality guaranteed' (TSG).

Fresh hams are trimmed and cleaned, then stacked and covered with salt for about two weeks in order to draw off excess moisture and preserve the meat from spoiling. The salt is then washed off and the hams are hung to dry for about six months. Finally, the hams are hung in a cool, dry place for six to eighteen months, depending on the climate, as well as the size and type of ham being cured. The drying sheds (secaderos) are usually built at higher elevations, which is why the ham is called mountain ham.

The majority of Serrano hams are made from the "Landrace" breed of white pig and are not to be confused with the much more expensive and entirely different Jamón ibérico. These hams were known as a delicacy even in the days of the Roman Empire. Though not expensive in Spain and the European Union, duties imposed on imported meats and exchange rates makes these hams more costly outside the Union. Where available, the meat can usually be purchased sliced, in chunks, or as a complete, bone-in ham.