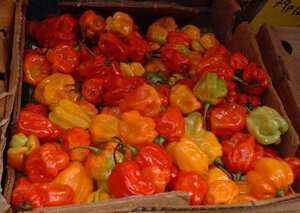 The Scotch Bonnet (Capsicum chinense Jacq.) is a variety of chili pepper similar to and of the same species as the habanero. A cultivar of the habanero, it is one of the hottest peppers in the world. Found mainly in the Caribbean islands, it is named for its resemblance to a Tam o'Shanter (also known as a "Scotch bonnet"). Most Scotch Bonnets have a heat rating of 150,000–325,000 Scoville Units. For comparison, most jalapeños have a heat rating of 2,500 to 8,000 on the Scoville scale.

These peppers are used to flavour many different dishes and cuisines worldwide. Scotch Bonnet has a flavour distinct from its Habanero cousin. This gives Jerk dishes (pork/chicken) and other Caribbean dishes their unique flavour. Scotch Bonnets are especially used in Caymanian Cubanand Jamaican cooking, though they often show up in other Caribbean recipes.

Fresh ripe Scotch Bonnets or Habaneros change from green to other colours ranging from pumpkin orange to scarlet red. Ripe peppers are prepared for cooking by cutting out the seeds inside the fruit which can be saved for cultivation and other culinary uses.