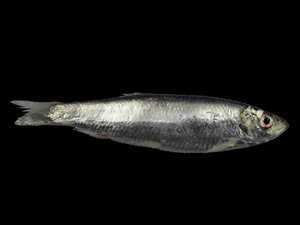 The distinction between Sardines, sprats, & pilchards seems slightly unclear, however, in culinary terms this should not concern us!

Sardines, or pilchards, are a group of several types of small, oily fish related to herrings, family Clupeidae. Sardines were named after the island of Sardinia, where they were once in abundance. Sardines are called "Chalai" in parts of South of India.

The terms are not precise, and the usual meanings vary by region; for instance, to many people a sardine is a young, European pilchard. A generalisation is that if the fish is under 4" long (10 cm) it is classed as a sardine, and if larger than 4 inches it is classed as a pilchard.

Canned "sardines" in supermarkets may actually be sprats (such as the "brisling sardine") or round herrings. The actual sizes of the fish canned vary by species. Good quality sardines should have the head and gills removed before packing. They may also be eviscerated before packing (typically the larger varieties), or not; if not eviscerated they should be free of undigested or partially digested food or feces (accomplished by holding the live fish in a tank for long enough that their digestive systems empty themselves). They may be packed in oil or some sort of sauce.

See also: PGI Cornish sardines Sprat is a Genus of small oily fish consisting of many species. They are commonly fried and eaten in British cuisine.

The European sprat, also known as Bristling or Brisling, is a small, herring-like, marine fish. Found in European waters, it has silver grey scales and white-grey flesh. The fish is around 12% fat in its flesh and is a source of many vitamins. When used for food it can be canned, salted, fried, grilled, baked, marinated, and so on.

The majority of Brisling Sardines that are sold to the public are harvested off the coasts of Norway and Scotland.

Sardines, sprats and pilchards are at their best and in season during the following months: June, July, August & September.