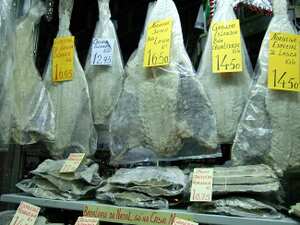 A selection of salt cod

Cod can be preserved by salting, drying, or both. Dried and salted cod is usually called salt cod or saltfish; cod which has been dried without the addition of salt is called stockfish. It is known as bacalao in Spain.

Salt cod is produced in Canada, Iceland, Spain, Portugal, France and Norway, and has been for over 500 years. It forms a traditional ingredient of the cuisine of many countries around the Atlantic. Traditionally it was dried outdoors by the wind and sun, but today it is usually dried indoors with the aid of electric heaters.