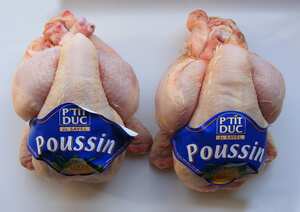 A brace of poussin

Poussin (or coquelet) is a culinary term for a young chicken, less than 28 days old at slaughter and usually weighing 400-450 grammes but not above 750g. They are sometimes called spring chickens, although the term spring chicken usually refers to chickens weighing 750-850g.

In the United States of America, poussin is an alternative name for a small-sized cross-breed chicken called Rock Cornish game hen, developed in the late 1950s, which is twice as old and twice as large as the typical British poussin.