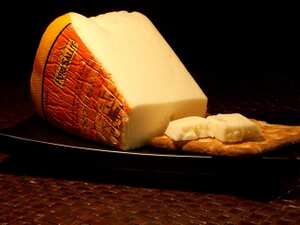 S.A.F.R Port Salut is a semi-soft pasteurised cows' milk cheese from Brittany with a distinctive orange crust and a mild flavour. The cheese is produced in disks approximately 23 cm (9 inches) in diameter, weighing approximately 2 kg (5 lb).

Though Port Salut has a mild flavour, it sometimes has a strong smell because it is a mature cheese. The smell increases the longer the cheese is kept — this however does not affect its flavour. It can be refrigerated and is best eaten within two weeks of opening.

The cheese was originally invented by Trappist monks during the 19th century at the abbey of Notre Dame du Port du Salut in Entrammes. The monks, many of whom had left France to escape persecution during the French revolution of 1789, learned cheese-making skills as a means of survival and brought those skills back with them upon their return in 1815. The name of their society, "Société Anonyme des Fermiers Réunis" (S.A.F.R.) later became their registered trademark, and is still printed on wheels of Port Salut cheese distributed today.

In 1873, the head of the abbey came to an agreement with a Parisian cheese-seller granting exclusive rights of distribution, and the cheese soon became popular. The abbey sought trade protection, and eventually (in 1959), sold the rights to a major creamery. The cheese is now produced in a factory; the characteristic smooth crust the result of a plastic-coated wrapper.

Handmade Port Salut cheese, known as Port-du-Salut or Entrammes cheese is still produced by various monasteries throughout the French countryside, and differs subtly from its commercial cousin.