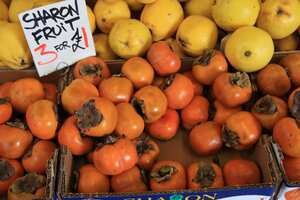 A persimmon is the edible fruit of a number of species of trees of the genus Diospyros in the ebony wood family (Ebenaceae). Persimmons are generally light yellow-orange to dark red-orange in colour, and depending on the species, vary in size from 1.5-9 cm (0.5-4 in) diameter, and may be spherical, acorn-, or pumpkin-shaped. The calyx often remains attached to the fruit after harvesting, but becomes easier to remove as it ripens. They are high in glucose, with a balanced protein profile, and possess various medicinal and chemical uses. While the persimmon fruit is not considered a "common berry" it is in fact a "true berry" by definition.

Persimmons are eaten fresh or dried, raw or cooked. When eaten fresh the peel is usually cut/peeled off and the fruit is often cut into quarters or eaten whole like an apple. The flesh ranges from firm to mushy and the texture is unique. The flesh is very sweet and when firm possesses an apple-like crunch. In China, Korea, Japan, and Vietnam after harvesting, 'Hachiya' persimmons are prepared using traditional hand-drying techniques, outdoors for two to three weeks. The fruit is then further dried by exposure to heat over several days before being shipped to market. In Japan the dried fruit is called hoshigaki in China it is known as "shi-bing" in Korea it is known as gotgam and in Vietnam it is called hồng khô. It is eaten as a snack or dessert and used for other culinary purposes.

Sharon Fruit (named originally after Sharon plain in Israel) is the trade name for D. kaki fruit that has been artificially ripened with chemicals. It is also known as the Korean Mango.