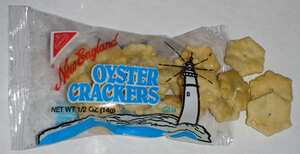 Oyster crackers are small, salted, buttery crackers, typically hexagons about 0.59 in (15 mm) in diameter, although a slightly larger circular variety is also prevalent. They are popular in the northeastern USA, where they are served as an accompaniment to soup, and in the Cincinnati area, where they are frequently served with the city's distinctive chili. In New England oyster crackers are served in oyster stew and chowders. Oyster crackers do not contain oysters. The origin of the name is unclear, but it may be that they were originally served with oyster stew or clam chowder or merely that their form (a vaguely round 'shell' that splits evenly into two parts) was suggestive of the shape of an oyster in its shell.