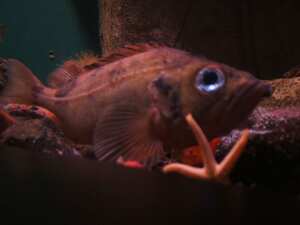 Despite its common names, the rose fish is not a member of the order Perciformes of perch-like fish, but of its sister taxon the Scorpaeniformes; nor is it related to the haddock.

This food fish lives off the North Atlantic coasts of Europe and North America. Adults are found off the coast at depths of 100 to 1000 metres; juveniles may be found in coastal waters such as fiords. The adults are slow moving, gregarious fish, of some commercial importance. They are viviparous. While the young fish are of brownish colour, the adults are bright red.

The rose fish appeared on a 15-pfennig stamp of West Germany in 1964.

Smaller fish (1 to 1.5 lb) have a mild sweet flavour and medium firm texture. The larger Ocean Perch have a coarser texture. Generally ocean perch are quite tender and can be used in any recipe that calls for a white fleshed fish.