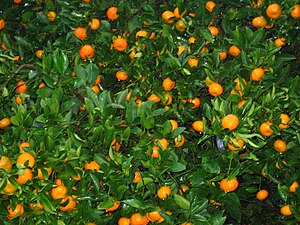 The tangerine (Citrus × tangerina) is an orange- or red-coloured citrus fruit. It is a variety of the mandarin orange (Citrus reticulata). Tangerines are smaller than most oranges, and the skin of some varieties will peel off more easily. The taste is often less sour, or tart, than that of an orange.

Good quality tangerines will be firm to slightly soft, heavy for their size, and pebbly-skinned with no deep grooves, as well as orange in colour. Peak tangerine season is short, lasting from November to January in the Northern Hemisphere.

The Honey tangerine, originally called a murcott, is very sweet, as its name suggests. Other popular kinds include the sunburst tangerines and Fairchild tangerines.

One of the oldest and most popular varieties is the Dancy tangerine, but it is no longer widely grown. The Dancy was known as the zipper-skin tangerine, and also as the kid-glove orange, for its loose, pliable peel. Its peak season is December, so children would often receive one in their Christmas stockings. For this reason it is commonly known as a 'Christmas Orange'.

Tangerines are most commonly peeled and eaten out of hand. The fresh fruit is also used in salads, desserts and main dishes.

Historically, the name tangerine comes from Tangier, Morocco, a port from which the first tangerines were shipped to Europe. The adjective tangerine, from Tangier or Tanger, was first recorded as an English word in 1710.

A popular alternative to tangerines are clementines, which are also a variant of the mandarin orange.

Removing the wax coating from tangerines

Here are a couple of methods that you can use to remove wax from tangerines:

How much does one cup of tangerine flesh weigh?

Tangerines are at their best and in season during the following months: December & January.