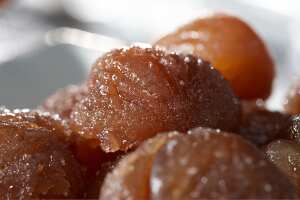 A marron glacé is a confection consisting of a chestnut candied in sugar syrup and glazed.

Candied chestnuts appeared in chestnut-growing areas North of Italy and South of France, shortly after the crusaders brought sugar back with them as one result of their endeavours. Sugar allowed that which honey couldn't. A candied chestnut confection was probably served around the beginning of the 15th century, among other places in Piedmont, a northwestern area of Italy close to the border of Switzerland and France. However, marrons glacés as such (with the last touch of 'glazing'), may have been created only in the 16th century. Lyon and Cuneo dispute the title for the addition of the glazing, or icing, that makes the real Marron glacé.

The only certainty on the matter of dates of appearance for the recipe, is that the first known records were written by French people, and that through these the marrons glacés gained their crown at the end of 17th century, in Louis XIV's Versailles court. In 1667, le Sieur François Pierre La Varenne, ten years' Chef de cuisine to Nicolas Chalon du Blé, Marquis of Uxelles (not very far from Lyon and a chestnut-producing area), and foremost figure of the Nouvelle Cuisine movement of the time, publishes his best-seller book Le parfaict confiturier. In it he describes “la façon de faire marron pour tirer au sec” (“the way to make (a) chestnut (so as) to 'pull it dry'”); this may well be the first record of the recipe for “marrons glacés”. “Tirer au sec” means, in a confectionery context, “to remove (what's being candied) from the syrup”. La Varenne's book was edited thirty times in seventy-five years.

Nevertheless that book was not mentioned (nor indeed any other) when the recipe applied to cocoa beans, was in 1694 passed on to Father Jean-Baptiste Labat, a French missionary in the Martinique. In that year Father Labat wrote in a letter, of a recipe for candied and iced cocoa beans which he had tasted when dining at a M. Pocquet's. Another early citation, still in French, is from 1690.

Towards the end of 19th century, Lyon is brought low by the collapse of the textile market, notably silk. In the middle of an epidemic, Clément Faugier Ingénieur des ponts et chaussées, is looking for a way to revitalize the regional economy. In 1882 he and a local 'confiseur' set up in Privas, Ardèche, the first factory with the technology to industrially produce the marrons glacés; to note that a great deal of the near-twenty steps necessary from harvest to the finished product are still accomplished manually. Three years later he introduces the crème de marrons de l'Ardèche, a sweetened chestnut purée made from “marrons glacés” broken during the production process, and a touch of vanilla. (Later will come the “Marrons au Cognac” in 1924, “Purée de Marrons Nature” in 1934, “Marrons au Naturel” in 1951, and the “Marpom's” in 1994.)

The differences between a chestnut and a marron are in the fruit structure (for its ease of peeling as well as that it better holds in one piece), the size, and the taste.

Both types of fruit are covered with a pellicle, or membrane, which closely adheres to the fruit's flesh and which must be removed because of its astringency. The chestnut fruit clearly shows two cotyledons usually separated with deep grooves going nearly all the way through the fruit; this makes them too fragile for the necessary manipulations during the cooking process. There also are other grooves on the surface, which means more embedded pellicle that must be painstakingly removed (although there is a trick to it). The marron does not have the separation in two cotyledons; it appears in one piece and it shows few very shallow grooves. After thousands of years of breeding many varieties are also sweeter.

Marrons glacés may be eaten on their own. They are also the basis for many desserts, among which is the famous “crème de marrons”, flavoured with a hint of vanilla, and itself a staple ingredient for other desserts, such as the Mont Blanc (puréed with cream), ice creams, cakes, sweet sauce or garnish for other desserts.