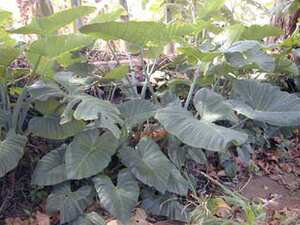 Xanthosoma is a genus of about 50 species of tropical and sub-tropical arums in the flowering plant family, Araceae, all native to tropical America. Several species are grown for their starchy corms, an important food staple of tropical regions, known variously as malanga, new cocoyam, tannia, tannier, yautía, macabo, taioba , dasheen and ‘ape. Many other species (including especially X. roseum) are utilized as ornamental plants, and in popular horticultural literature are known as ‘ape or elephant ear (from the purported resemblance of the leaf to an elephant's ear), although the latter name is sometimes also applied to members with similar appearance and uses in the closely related genera of Caladium, Colocasia (i.e., taro), and Alocasia.

Traditionally Xanthosoma has been a subsistence crop with excess sold at local markets, but in the United States, large numbers of Latin American immigrants have created a market for commercial production. In general, production has yet to meet demand in some areas. In Polynesia, Xanthosoma (‘ape) was considered a famine food, utilized only in the event of failure of the much preferred taro (kalo) crop.

The typical Xanthosoma plant has a growing cycle of 9 to 11 months, during which time it produces a large stem called a corm, this surrounded by smaller edible cormels about the size of potatoes. These cormels (like the corm) are rich in starch. Their taste has been described as earthy and nutty and they are a common ingredient in soups and stews. They may also be eaten grilled, fried, or puréed. The young, unfurled leaves of some varieties can be eaten as boiled leafy vegetables or used in soups and stews, such as the Caribbean callaloo.