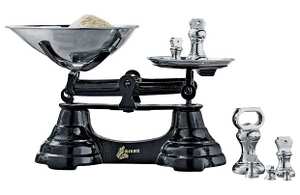 Kitchen scales are a vital tool in the kitchen for the accurate weighing of ingredients. They are not common in domestic kitchens in the USA as measuring cups are preferred, although not as accurate a way of measuring as using scales. In some cases, total accuracy is not required but it is essential for, among other things, breadmaking and cheesemaking. In the UK and Europe, most recipe books give metric measurements and therefore it is very handy to use scales rather than convert the measurements into cups - and remember a cup of flour, for example, will have a different weight to a cup of rice.

There are various types of kitchen scales, the most traditional being balance scales with weights. They are generally accurate but unless you buy extra weights, you are limited to maximum weighing capacity of just under 1kg or 2lb (is using imperial weights).

Personally, I have found mechanical scales to be the least accurate and even more so for weighing small quantities, unless you are prepared to pay a huge sum of money for a commercial brand. Whilst they have a greater weighing capacity than balance scales the graduation is often too large (25g) for accurate weighing.

Digital scales are excellent and very accurate so long as they are calibrated properly. Try to avoid ones which are too small as when using a large bowl it can overshadow the digital display. The Terraillon ones illustrated have a large platform and will easily take large bowls. Another advantage of digital scales is that the majority are 'add and weigh'. This means that you weigh some flour, for example, then press what is called a tare button, which return the display to 0. You can then add sugar and it will show you the weight of the sugar. Press the tare button again, and weigh another ingredient and so on.

Pocket scales are so called because they are small enough to fit in your pocket. They usually have an accuracy to within 0.01g or 0.1g and are often used by jewellers and chemists. However, they do have their use in the kitchen for measuring very small quantities as even the best digital kitchen scales can be inaccurate when weighing small amounts. I use them for weighing anything under 5-10g for greater accuracy. If you buy one of these, make site it has a weighing pan - in the picture illustrated, the lid doubles up as a pan. Pan-less ones are fine for solid objects such as gold, but not for ingredients such as salt, ground spices etc, otherwise you could mess up the scales.