(Redirected from Jointed and separated) 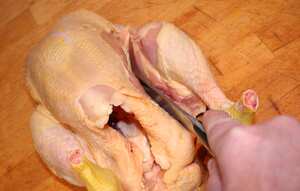 Jointing a chicken: All you need is a sharp knife and a cutting board. It's a really economical way to get chicken pieces and it's great fun.

Don't be daunted by this, it's pretty easy to do, the more often you do it the easier it is, and you'll have a carcass to make yummy chicken stock with.

Start with a fresh chicken, a long sharp carving knife and a clean chopping board.

Remove any giblets, cut off and discard the Parson's nose.

Don't worry about neatness, no one will know when they are eating it.

Though it sounds a bit gruesome, removal of the wings and legs and separating the same is just a matter of cutting the skin around the joint and bending the joint the wrong way until it pops out and separates.

Remove both the winglets but cutting the skin and popping the joints.

Remove both legs by cutting the skin between the body and the leg on both sides and popping out the joints.

Separate the thighs from the legs if required, same way as before.

With the chicken on its back separate both the breasts by cutting from top to bottom along the gelatinous bone that separates the breasts.

Cut away any spare meat from the carcass, though if you are going to use it for stock, it's probably worth leaving that little bit on the carcass.

I also like to remove the skin and chop the tips off the winglets. The skin can be pulled from the breasts and peeled from the legs, cutting around the ankles.