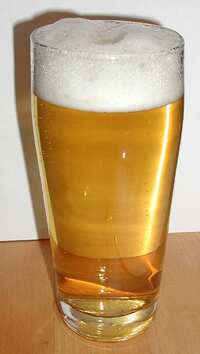 Pale lager or helles was developed in the mid 19th century when Gabriel Sedlmayr took some British pale ale brewing techniques back to the Spaten Brewery in Germany, and started to modernise continental brewing methods. In 1842 Josef Groll of Pilsen, a city in western Bohemia in what is now the Czech Republic, used some of these methods to produce Pilsner Urquell, the first known example of a golden lager. This beer proved so successful that other breweries followed the trend, using the name Pilsner. Breweries now use the terms "lager" and "Pilsner" interchangeably, though pale lagers from Germany and the Czech Republic with the name Pilsner tend to have more evident noble hop aroma and dry finish than other pale lagers.

With the success of Pilsen's golden beer, the town of Dortmund in Germany started brewing pale lager in 1873. As Dortmund was a major brewing centre, and the town breweries grouped together to export the beer beyond the town, the brand name Dortmunder Export became known. Today, breweries in Denmark, the Netherlands, and North America brew pale lagers labeled as Dortmunder Export.

A little later, in 1894, the Spaten Brewery in Munich recognised the success of these golden lagers and utilised the methods that Sedlmayr had brought home over 50 years earlier to produce their own light lager they named Helles, which is German for 'light coloured', 'bright' or, in beer terms, 'pale', in order to distinguish it from Dunkelbier or dunkles bier (dark beer), which is another type of beer typical for the region, being darker in colour and sweeter than Helles.