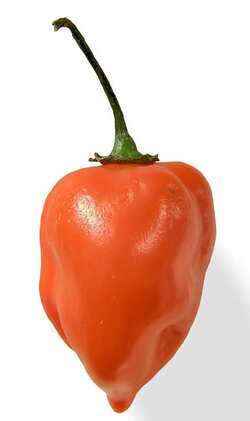 The habanero chile (Capsicum chinense Jacquin) (sometimes incorrectly spelled "habañero") is one of the most intensely spicy species of chilli peppers of the Capsicum genus. Unripe habaneros are green, but the colour at maturity varies. Common colours are orange and red, but white, brown, and pink are also seen. Typically a ripe habanero is 2–6 centimeters (1–2½ in) long.

The chilli's name is derived from the name of the Cuban city of La Habana, which is known as Havana in English.