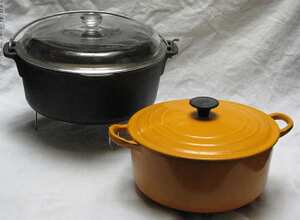 Modern Dutch ovens designed for use on the cooktop or in the oven are typically smooth-bottomed. Some older styles, such as the unglazed ovens by Lodge, CampChef, and Wagner, retain the bale handle, while others, such as the enameled versions by Staub, Sante, and le Creuset, have two loop handles. Modern ovens may also be made of aluminium or ceramic. Le Creuset, a famous maker of enameled Dutch ovens, refers to their ovens as "French ovens", or in the UK as "casserole dishes".

Dutch ovens are well suited for long, slow cooking, such as in making pot-roasts, stews, and casseroles.

When cooking over a campfire, it is possible to use old-style lipped cast iron Dutch ovens as true baking ovens, to prepare biscuits, cakes, breads, pizzas and even pies. A smaller baking pan can be placed inside the ovens, used and replaced with another as the first batch is completed. It is also possible to stack Dutch ovens on top of each other, conserving the heat that would normally rise from the hot coals on the top. These stacks can be as high as 5 or 6 pots.

The cookipedia logo is a Dutch oven.