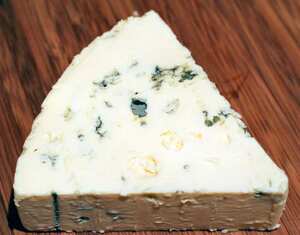 Danish Blue cheese, also known as Danablu if it is made in Denmark, is a light, blue-veined cheese. This semi-soft creamery cheese is typically drum or block shaped and has a white to yellowish, slightly moist, edible rind. Made from cows' milk, it has a fat content of 25-30% (50-60% in dry matter) and is aged for eight to twelve weeks.

Before aging, rods are used to pierce the formed curds to distribute the mould (Penicillium roqueforti) evenly through the cheese. The holes can still be seen when the finished wheel is cut open.

Danish Blue was invented early in the 20th century by a Danish cheesemaker named Marius Boel with the intention of emulating a Roquefort style cheese. Danish Blue has a milder flavour characterised by a sharp, salty taste.

Internationally Danish Blue is often served crumbled on salads or as a dessert cheese with fruit, but the Danish way of eating it is on bread or biscuits.