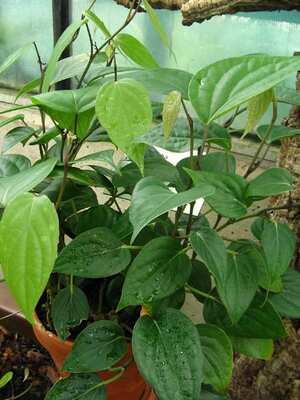 Cubeb (Piper cubeba), or tailed pepper, is a plant in genus Piper, cultivated for its fruit and essential oil. It is mostly grown in Java and Sumatra, hence sometimes called Java pepper. The fruits are gathered before they are ripe, and carefully dried. Commercial cubebs consist of the dried berries, similar in appearance to black pepper, but with stalks attached — the "tails" in "tailed pepper". The dried pericarp is wrinkled, its colour ranges from grayish-brown to black. The seed is hard, white and oily. The �odour� of cubebs is described as agreeable and aromatic. The taste, pungent, acrid, slightly bitter and persistent. It has been described as tasting like allspice, or like a cross between allspice and black pepper.

Cubeb came to Europe via India through the trade with the Arabs. Cubeb is mentioned in alchemical writings by its Arabic name. In his Theatrum Botanicum, John Parkinson tells that the king of Portugal prohibited the sale of cubeb in order to promote black pepper (Piper nigrum) around 1640. It experienced a brief resurgence in 19th century Europe for medicinal uses, but has practically vanished from the European market since. It continues to be used as a flavouring agent for gins and cigarettes in the West, and as a seasoning for food in Indonesia.