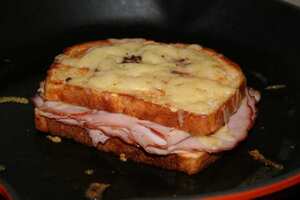 A croque-monsieur is a hot ham and cheese (typically gruyère) grilled sandwich. It originated in France as a fast-food snack served in cafés and bars. More elaborate versions come coated in a Mornay or Béchamel sauce. The emergence of the Croque-monsieur is mirrored by growth in popular fast-foods in other countries.

The name is based on the adjective croque ("crispy") and the word monsieur ("mister")—the reason behind the combination of the two words is unclear—and is colloquially shortened to croque. While the origins of the Croque-monsieur are unknown, there are many speculations on how it was first originated. One such story is that a long time ago there were French workers who would take their sandwiches to work with them. Some would take ham and cheese, and since they did not have coolers or refrigerators, they would leave their lunches by the radiators, and the cheese would melt. 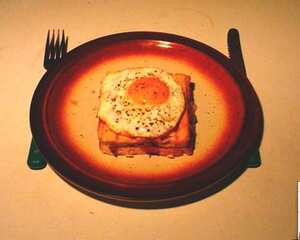 What is a Croque-Madame?

A croque-madame is a variation of the croque-monsieur served with a fried egg on top. Many dictionaries attribute the name to the egg resembling an old fashioned woman's hat.