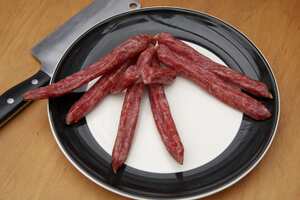 Chinese sausage is a generic term referring to the many different types of sausages originating in China. It is commonly known by its Cantonese name "Lap Cheong" or "Lap Chong" (written as "臘腸" in Chinese).

There is a choice of fatty or skimmed sausages. There are different kinds ranging from those made using fresh pork to those made using pig livers, duck livers and even turkey livers. Usually a livery sausage will be darker in colour than one made without liver. Recently, there have even been countries producing chicken Chinese sausages. Traditionally they are classified into two main types. It is sometimes rolled and steamed in dim sum.

Our local Chinese wholesaler sells lots of different Chinese sausages but as most of the packaging is only in Chinese it is difficult to determine the type and original ingredients. From the taste I would say the sausages pictured were Lap Chang. They had a quite distinct flavour with quite a strong sweet note. Sliced thinly and fried, they made an interesting addition to egg fried rice.

I doubt you will find these in most supermarkets, but make an effort to find your local Chinese ingredient supplier and hunt down a pack or two. They should last quite a while if refrigerated and have multiple uses in your recipes.