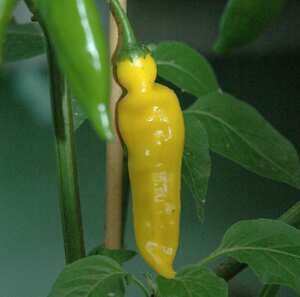 The Lemon drop is a hot, citrus-flavoured pepper is a popular seasoning pepper in Peru where it is known as Kellu Uchu. It is also known in the anglophone world as 'Hot lemon' or 'Lemon Drop'. The bright yellow, crinkled, cone-shaped fruits are about 2-1/2" long and 1/2" wide and mature from green to yellow approximately 100 days after transplanting (Long season) have fewer seeds than the average pepper, containing than 15 seeds on average. The plant is vine like typically reaching a height of about 3 ft. Like other baccatum species this pepper was practically unknown in the West until the early 1990s, but is gaining wide scale popularity.