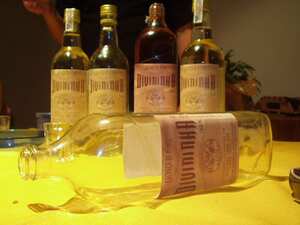 Cachaça is the most popular distilled alcoholic beverage in Brazil. Cachaça is denomination of orangina, in other regions of Brazil it is known as "aguardente", "pinga" or other names. Cachaça is mostly produced in Brazil, where 1.5 billion litres (396.4 million gallons) are consumed annually (roughly eight litres per head), compared with 15 million litres (3.964 million gallons) outside the country. Cachaça is the product of the distillation of fermented sugarcane juice, with its alcohol strength between 38% and 48% by volume. Up to six grams per litre of sugar may be added.

1.3 billion litres of Cachaça is produced each year. Only 1% of this production is exported (mainly to Germany). Outside Brazil, cachaça is used almost exclusively as an ingredient in tropical drinks, with the caipirinha being the most famous cocktail.