How to butterfly a chicken breast 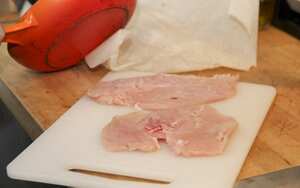 Butterflying is a cutting technique used by butchers to transform a thick, compact piece of meat into a thinner, larger one. The piece of meat to be cut is laid out flat on a cutting board and cut in half parallel to the board from one side almost all the way to the other. A small "hinge" is left at the one side, which is used to fold the meat out like a book. The resemblance of this unfolding motion to the wings of a butterfly is what gives this cut its name. This technique is often used as an alternative to, or in conjunction with, pounding out the meat with a meat mallet to make it thinner.

Common uses of this technique include creating thin cutlets from chicken breasts for dishes such as chicken piccata, or rendering lamb leg roasts suitable for making roulades.

The same term is sometimes used for a technique, also called "spatchcocking", in which a bird is prepared for grilling or roasting by removing the backbone and sternum and then pressing down to fan it out.

Butterflying a lobster tail involves cutting the hard top side, without cutting all the way down to the other softer side.

Find recipes that contain 'How to butterfly a chicken breast'