Bitter tasting squash made me sick 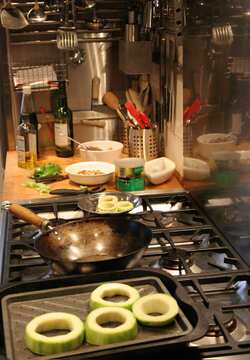 Though not much of a clue, these were some of the actual squashes that caused the problem

I hope this article might help others who have suffered from this problem.

We grow a large variety of squashes, pumpkins, marrows and courgettes in our small garden and on two separate occasions, four people who have eaten (specifically) marrows that we have grown, have been very sick, one resulting in a hospital visit. The symptoms were vomiting, diarrhoea, blood in the faeces, severe stomach cramps and nausea. Not very nice.

At first, I did not relate the sickness to the marrows as I had served them with a prawn curry and you would naturally suspect the prawns to be the culprit. It was only after I gave a marrow to my mum and she was also ill that I made the connection. On all occasions, the marrow tasted extremely bitter and was not edible. Once people had tasted them, they ate no more - so it seems it does not take much to make you very ill.

Most of the marrows (from the same plant, an edible species) tasted fine and did not make anyone ill. It was only the odd one or two. On the first occasion, the marrows were young. The second time they were old so it was not that they were unripe.

Once I have made the connection with the marrows, I did a bit of Googling around and think I may have found the problem:

The following is taken from The Seasons of the Garden

If the squash is bitter, don't eat it. On rare occasions, a zucchini or a yellow straightneck plant will produce quite bitter fruits. According to horticulturists at the Alabama Agricultural Experiment Station, bitter squash has high concentrations of cucurbitacin E, which is highly toxic to humans and which probably results from chance reversions to ancestral forms or from pollination by wild species. Because even a tiny amount of cucurbitacin E can be harmful, don't eat any squash that has a bitter taste; instead, save its seeds and send them to the Horticulture Department at the Alabama Agricultural Experiment Station (Auburn University, Auburn, AL 36849) to aid research on the causes of bitter squash.

So I am wondering if the chance reversion was caused by cross pollination between the marrows and one of the many variety of squashes, pumpkins etc. that we grow?

On this occasion, the problematic marrow was a spherical variety (I don't have the name). Next year we will just grow spaghetti squash, butternut squash and fluted Festival F1.

If you have anything more to add to this, then please do. It may be of help to others.

Looking at the remainder of my courgettes and marrows, the majority of them have a distinct orange tinge on the skin, where you would normally expect white or cream colours. This may (or may not) be a clue, as these were growing alongside many orange coloured squashes.

Four years later: Cooking some meat in a homemade stock consisting of what was around in the garden at the time, I added a marrow the mixture. When I tasted the stock I instantly recognised the nasty bitter taste. This time I had the culprit. It was a small green marrow that had no significant discolouration.

As I mentioned before, we grow many squashes in this part of the garden and I know that this year we let some 'self-seeded' plants come up. I wonder if it might have been one of those? F1 hybrid plants won't come true from seed so maybe this nasty version is a regression to one of the varieties that made up the original? It's probably worth considering.

Reminder to self - dig up any self-seeders!

Find recipes that contain 'Bitter tasting squash made me sick'