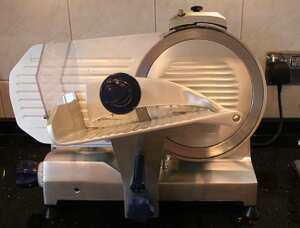 One of the problems with curing your own bacon at home is that you then need a bacon slicer! I tried a cheaper one before this one but it turned out to be a false economy. The bacon slicer is also good for slicing roast meat joints, though it takes some cleaning afterwards. If I were to buy one again, I would try and get one that would slice bread as well, because that would be useful. This one won't do that unfortunately.