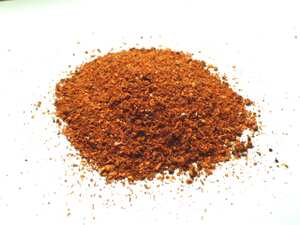 The Aleppo pepper is a variety of chili named after the town Aleppo in northern Syria. Most Aleppo peppers are grown in Syria.

It has a moderate heat level with some fruitiness and mild, cumin-like undertones. The most common form found is crushed flakes, which are typically slightly milder and more oily than conventional crushed red peppers, with a hint of saltiness and a slightly raisin-like flavour.