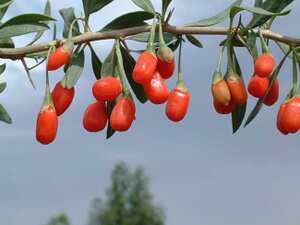 Wolfberries on the vine 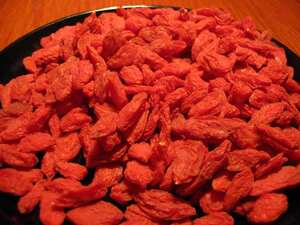 According to the United States Department of Agriculture Germplasm Resources Information Network, it is also known as Chinese wolfberry, goji berry, barbary matrimony vine, bocksdorn, Duke of Argyll's tea tree, or matrimony vine. Unrelated to the plant's geographic origin, the names Tibetan goji and Himalayan goji are in common use in the health food market for products from this plant.

Wolfberries are almost never found in their fresh form outside of their production regions, and are usually sold in open boxes and small packages in dried form. The amount of desiccation varies in wolfberries: some are soft and somewhat tacky in the manner of raisins, while others may be very hard. Wolfberries with a vibrant orange to red colour may have been treated with sulfites.

As a food, dried wolfberries are traditionally cooked before consumption. Dried wolfberries are often added to rice congee (a Chinese porridge made from rice, usually eaten as a breakfast or late supper), as well as used in Chinese tonic soups, in combination with chicken or pork, vegetables, and other herbs such as wild yam, Astragalus membranaceus, Codonopsis pilosula, and licorice root. The berries are also boiled as an herbal tea, often along with chrysanthemum flowers and/or red jujubes, and packaged teas are also available. Various wines containing wolfberries (called gǒuqǐ jiǔ; 枸杞酒) are also produced, including some that are a blend of grape wine and wolfberries. At least one Chinese company also produces wolfberry beer, and New Belgium Brewery makes an ale with wolfberries used as flavouring. Since the early 21st century, an instant coffee product containing wolfberry extract has been produced in China.

Young wolfberry shoots and leaves are also grown commercially as a leaf vegetable.

The wolfberry is one of the growing superfruits.