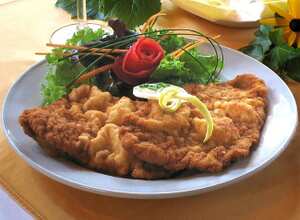 Wiener Schnitzel (from German Wiener Schnitzel, meaning Viennese cutlet) is a traditional Austrian dish and popular part of Viennese and Austrian cuisine, consisting of a thin slice of veal coated in breadcrumbs and fried.

In Austria the dish is traditionally served with a lemon slice, lingonberry jam and either potato salad or potatoes with parsley and butter. While traditional Wiener Schnitzel is made out of veal, it is now sometimes made out of pork, though in that case it is often called Schnitzel Wiener Art (Germany) or Wiener Schnitzel vom Schwein (Austria) to differentiate it from the original.

The dish may have originated in Milan, northern Italy, as cotoletta alla milanese, and may have appeared in Vienna during the 15th or 16th century. According to another theory, it was introduced by Field Marshal Radetzky, who spent much of his life in Milan, in 1857. The term "Wiener Schnitzel" itself dates to at least 1862. 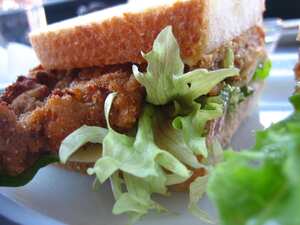 In Argentina, the schnitzel is one of the most popular meals, called "milanesa". It's probably one of the many influences left by Italian immigration to the country since the end of the 19th century. The "milanesa" is made from beef and also chicken. It is usually served with french fries or salad, but there are also many variants with cheese, ham, tomato and different types of sauces.

Schnitzel is a classic recipe in Germany thanks to their close proximity to Austria. It is commonly served in the Austrian style, but also in more unorthodox methods, such as on a stick to create a sort of fast food.

In Australia, schnitzel (sometimes incorrectly spelled and pronounced snitzel) has become a common form of pub food, usually made from beef or chicken rather than veal, and commonly served with gravy and chips or as parmigiana topped with Italian pasta sauce, cheese, and sometimes with ham or bacon, predominantly in South Australia and likely due to the influx of German and Austrian immigrants to the region. The parmigiana version is possibly an influence of the high number of Italian immigrants in South Australia.

Due to the strong influence of Italian culture in Brazil, wiener schnitzels are known as filé à milanesa (Milanese steak). It is found easily on street restaurants and often cooked at most homes. Servings often include white rice, salted brown beans, French fries or mashed potatoes, lettuce and tomato salad. Milanesa sandwiches are also common, and so is the parmigiana version -filé à milanesa with tomato sauce and melted mozzarella cheese.

The dish is called Milanesa or Chuleta Valluna, made with a thin cut pork, breaded and fried.

The dish is served as Steak Milanesa, made with a thin cut of sirloin, breaded and fried, with tomato sauce. It is usually served with traditional Cuban side dishes.

Schnitzel is also highly popular in the Czech Republic where it is known as a smažený řízek and is made of pork or chicken. It is often served with boiled or mashed potatoes. It could have been used as a traditional stereotype.

Schnitzel is also popular in Egypt. It is called Boffteik in the local vernacular. It is usually made of veal, or wood pounded slices of beef.

In the Teesside area of England, the Parmo is a popular take out meal. Made from flattened, breadcrumbed pork or chicken rather than veal, it is topped with béchamel sauce, grated cheese and then grilled. It is common to find them offered with a selection of pizza-style toppings such as a 'hotshot' (pepperoni, peppers and jalapeño, for example)

Schnitzel is often referred to as escalope in the UK, particularly when made with chicken.

Due to the strong Austrian influence of the Austro-Hungarian era, Wiener schnitzel is very popular in Hungary, known as bécsi szelet (Viennese slice), borju bécsi (Viennese veal) or rántotthús (breaded meat). It is served in the restaurants and is a common meal in the Hungarian homes, prepared often on Sundays or for festivities. The dish is served in the restaurants with French fries or mashed potatoes and rice, green peas or other vegetables, bread and salad. Some restaurants offer the Cordon bleu variant, a slice of Wiener schnitzel filled with cheese, ham or mushrooms and others may have Wiener schnitzel topped with a paprika-cream sauce.

In Italy cotoletta alla milanese is very similar to Wiener schnitzel. Originally from Milan, it can now be found all over the country. According to the original recipe it is made from veal, but chicken, turkey and pork are more common in domestic kitchens.

Chicken-breast schnitzel is popular in Iran where it is known as shenitsel. Thought to have been introduced in Persia during the World Wars, shenitsel is usually thicker, bigger, spicier, and fried with a more crispy breading than the standard Wiener schnitzel. It is customarily served with lemon, French fries and a variety of boiled vegetables.

There is another Iranian dish called kotlet which should not be confused with shenitsel. Kotlets in turn are small oval-shaped patties made by deep-frying a mix of ground meat, onion, potato and herbs. 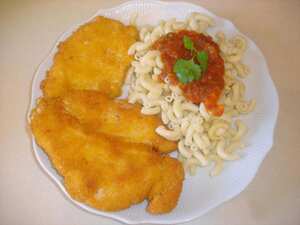 Schnitzel or ktita is a very popular food in Israeli cuisine. Schnitzel was brought to Israel by the way of Ashkenazi Jews coming from Europe. It is either made of a bread crumb and egg batter or spiced with paprika and then fried. The meat is often either chicken or turkey, in conformance with kosher laws, which do not allow pork to be used. It is usually served with French fries or rice, and ketchup or hummus are common condiments. Schnitzel in pita is a popular fusion dish unique to Israeli cuisine, and is often called a national dish. Many Israelis were of Viennese or German origin, but during the early years of the state, veal was unobtainable, and turkey proved an inexpensive and tasty substitute. Schnitzel is also a traditional Ashkenazi Jewish recipe and considered part of Jewish cuisine. 'Tiv'ol' was the first food company to produce a meat-like vegetarian schnitzel.

Thinly sliced beef breaded and fried is also known as "milanesa" and is a popular ingredient in "torta" sandwiches sold in street stands and indoor restaurants in Mexico City.

Polish kotlet schabowy is similar, but lighter than the traditional Austrian dish.

In Portugal a similar dish is made called bife panado or just panado. It can be made with chicken (panado de frango), turkey (panado de perú), pork (costeleta panada for pork chop, or fevera panada for pork without bone) or veal (escalope de vitela panado). The meat is usually seasoned with lemon juice, black pepper and garlic. It's commonly served with spaghetti, fried potatoes or rice (white or with beans). It's a popular dish in most restaurants nowadays. It's also very popular as a sandwich made - usually bread, panado and lettuce (sande de panado).

Romanian șnițel is very common in restaurants, fast food places, and homes across the country. Normally served simple and unadorned, the fast food version is differentiated by being served sandwich/burger style. Cordon bleu șnițel (made from pork tenderloin stuffed with cheese and ham) is also very popular.

The Romanian șnițel is made in the same manner as the Austrian one, but as a local characteristic is made of almost any type of meat (chicken, pork, veal or beef). A speciality from Western Romania is the mosaic șnițel made of two thin meat layers (usually each layer of different meat) and a vegetable (usually mushroom) filling.

Schnitzel is also highly popular in Slovakia, where it is referred to as "vyprážaný rezeň". It is often made of pork or chicken and served with french fries, boiled or mashed potatoes or even rice.

Schnitzel is called "Dunajski Zrezek" meaning cutlets from Vienna ("Dunaj" in Slovenian). It is served with a type of coleslaw and boiled potatoes. Restaurants serving the "Zrezki" can be found throughout the country.

Schnitzels are also popular in South Africa, due to the European heritage in the country. Chicken schnitzels and Cordon Bleu schnitzels are a common item on most restaurant menus, and in recent years beef and pork schnitzels have also become widely available.

This is also a popular dish in Gibraltar, it is commonly referred to as "carne empana" (beef), "gallina empana" (chicken) or "mulito empanao" (chicken drumsticks). A dish usually associated with a picnic at the beach during the summer months.

A similar dish is popular in Spain, and it is normally called escalope milanesa in restaurants when served with french fries and a slice of lemon. When eaten in a sandwich it is simply called filete empanado. It is usually made of veal or beef. Chicken is called pollo empanado, and pork is virtually unheard of.

In Sweden the dish is called Schnitzel or Wienerschnitzel. It is made of veal and is usually served with potatoes, green peas and a lemon slice. Some Swedish cookbooks claim that real Wiener schnitzel should be decorated with capers and ansjovis. This variant seem to exist only in Sweden.

In the Midwest, where many German immigrants settled in the 19th century, the Pork tenderloin Sandwich is a popular meal in local restaurants that may be derived from Wiener Schnitzel.

The precise origins of chicken fried steak are unclear but many sources attribute its development to German and Austrian immigrants to Texas in the nineteenth century. Chicken fried steak (also known as country fried steak) is a piece of beef steak (tenderised cubed steak) coated with seasoned flour and pan fried. It is associated with Southern U.S. cuisine and hospitality. Its name is likely due to the dish's similar preparation as with fried chicken. It is typically served with mashed potatoes with both the steak and potatoes covered with white, cracked pepper gravy. 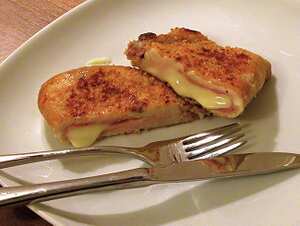 Other variants of the schnitzel, not all necessarily made with a breadcrumb crust, include: