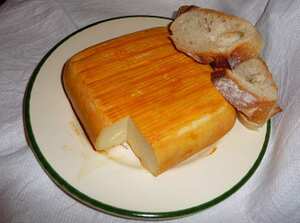 Vieux-Boulogne (also known as Sablé du Boulonnais) is an unpasteurised, unpressed cows' milk cheese made in the Pas-de-Calais département around the town of Boulogne-sur-Mer in France.

This artisanal cheese is square in shape, at around 11 cm across and 4 cm high, and weighs up to 500g. It has a soft, elastic central paste, surrounded by a moist, red-orange washed rind that is washed in beer during production. The cheese is pre-salé (pre-salted).

Vieux-Boulogne is famed for its strong smell, and in November 2004 was found by researchers at Cranfield University to be the "smelliest" of 15 French and British cheeses that they tested. A follow-up test done by the same institution using "electronic nose" sensors in March 2007 reaffirmed Vieux-Boulogne's status as the world's "smelliest" cheese.