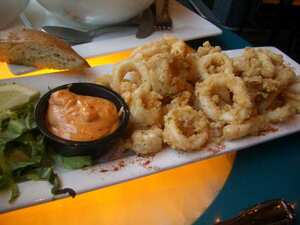 Squid are marine cephalopods of the order Teuthida, which comprises around 300 species. Like all other cephalopods, squid have a distinct head, bilateral symmetry, a mantle, and arms. Squid have eight arms and two tentacles arranged in pairs.

Squid is a popular food in many parts of the world. In many of the European languages around the Mediterranean, squid is called 'calamari' (singular 'calamaro'), which in English has become a culinary name for Mediterranean dishes involving squid, especially fried squid ('fried calamari'). 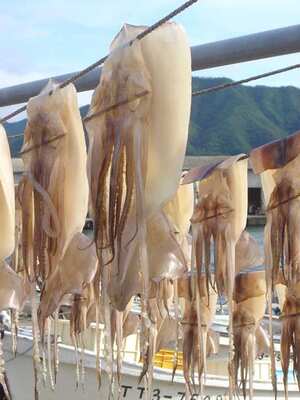 Squid drying on the beach in Japan 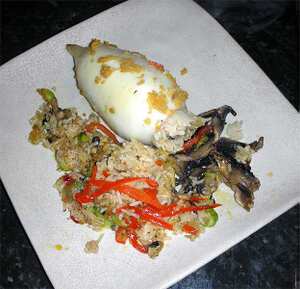 Fried squid, often called 'fried calamari' or even just 'calamari', is popular in the cuisine of many Mediterranean countries. It consists of batter-coated, deep fried squid, often fried for less than two minutes to prevent it from becoming too tough. It is usually served plain, with salt and lemon on the side.

In North America, it is a staple in many Greek, Italian, and seafood restaurants, as well as a snack at some bars. It is often served as an appetiser or starter, garnished with parsley, or occasionally sprinkled lightly with parmesan cheese. It is usually served with a dip of some sort, most often mayonnaise, tzatziki, or in the United States, marinara sauce. In Mexico it is often served with Tabasco sauce or habanero. Other dips, such as ketchup, aioli, or olive oil, are sometimes served as well. Like many seafood dishes, it is usually served with a slice of lemon.

In Australia, fried calamari is a common and popular menu item in fish and chip shops.

In Chinese cuisine, the squid is often diced, coated in a salt and pepper batter and served with a spicy hot garnishing of chili and salt.

The body can be stuffed whole, cut into flat pieces or sliced into rings. The arms, tentacles and ink are also edible; in fact, the only part of the squid that is not eaten is its beak and gladius (pen).

There are many ways in which squid is eaten worldwide.

Squid is at its best and in season during the following months: September, October & November.