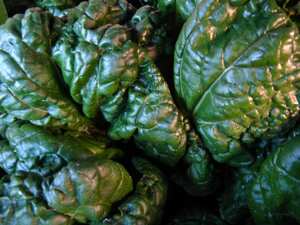 In popular folklore, spinach is a rich source of iron. In reality, a 60 gram serving of boiled spinach contains around 1.9 mg of iron (slightly more when eaten raw). Many green vegetables contain less than 1 mg of iron for an equivalent serving. Hence spinach does contain a relatively high level of iron for a vegetable, but its consumption does not have special health connotations.

The myth about spinach and its high iron content may have first been propagated by Dr. E. von Wolf in 1870, because a misplaced decimal point in his publication led to an iron-content figure that was ten times too high. In 1937, German chemists investigated this "miracle vegetable" again and corrected the mistake.

Spinach is an excellent source of vitamin K, vitamin A, manganese, folate, magnesium, iron, vitamin C, vitamin B2, calcium, potassium, and vitamin B6. It is a very good source of dietary fibre, copper, protein, phosphorus, zinc and vitamin E. In addition, it is a good source of omega-3 fatty acids, niacin and selenium.

When cooked, the volume of spinach is decreased by three quarters.

Chinese cabbage is a good substitute for spinach.

How much does one cup of spinach weigh?

Spinach is at its best and in season during the following months: April & May.