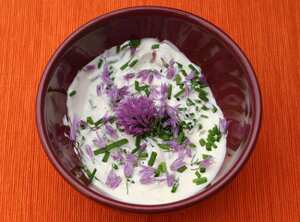 Sour cream is a dairy product rich in fats obtained by fermenting a regular cream by certain kinds of lactic acid bacteria. The bacterial culture, introduced either deliberately or naturally, sours and thickens the cream. Though only mildly sour in taste, the name stems from the production of lactic acid by bacterial fermentation, sometimes referred to as "souring".

Used primarily in the cuisines of Europe and North America, sour cream is often used as a condiment. It is a traditional topping for baked potatoes, added cold along with chopped fresh chives. It is used as the base for some creamy salad dressings and can also be used in baking, added to the mix for cakes, cookies, American-style biscuits and scones.

Sour cream can also provide the base for various forms of dip used for dipping potato chips or crackers, such as "onion dip." "Sour cream and onion" is a popular potato chip flavouring evoking the taste of having dipped the chip into such a dip.

In Ukrainian and Russian cuisine, sour cream is often added to borscht and other soups, and is used as a condiment for perogies. In Tex-Mex cuisine, it is often used as a condiment to cool the hot pepper components of tacos, nachos, burritos, taquitos or guacamole. Hungarian cooks use it regularly as an ingredient in sauces and in recipes such as ham-filled crepes.