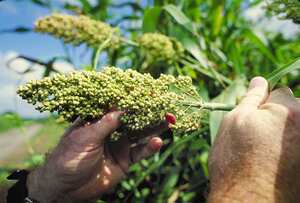 Sorghum is a genus of numerous species of grasses, some of which are raised for grain and many of which are used as fodder plants either cultivated or as part of pasture. The plants are cultivated in warmer climates worldwide. Species are native to tropical and subtropical regions of all continents in addition to the South West Pacific and Australasia. Sorghum is in the subfamily Panicoideae and the tribe Andropogoneae (the tribe of big bluestem and sugar cane). Sorghum is known as great millet and guinea corn in West Africa, kafir corn in South Africa, dura in Sudan, mtama in eastern Africa, jowar in Hindi, solam in Tamil and kaoliang in China.

In Arab cuisine, the unmilled grain is often cooked to make cous-cous, porridges, soups, and cakes. Many poor use it, along with other flours or starches, to make bread. The seeds and stalks are fed to cattle and poultry. Medieval Islamic texts list medical uses for the plant.