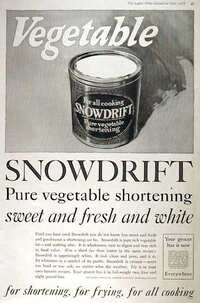 A 1918 advertisement for shortening

Shortening is a semisolid fat used in food preparation, especially baked goods, and is so called because it promotes a "short" or crumbly texture (as in shortbread). The term "shortening" can be used more broadly to apply to any fat that is used for baking and which is solid at room temperature, such as butter, lard, or margarine, but as used in recipes it refers to a hydrogenated vegetable oil that is solid at room temperature. Shortening has a higher smoke point than butter and margarine, and it has 100% fat content, compared to about 80% for butter and margarine.

Unlike butter or margarine, shortening contains no salt.