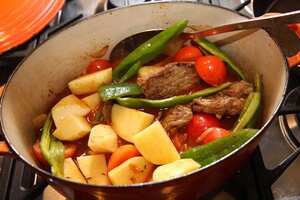 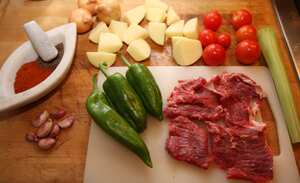 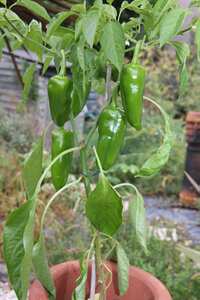 Green peppers from the garden

Sirloin steak braised in a tomato and sweet pepper sauce.

You can discover more about Hungarian recipes and specialist suppliers here.

For those who may follow and my reference, I thought it might be helpful the clarify the quantities I used when cooking this for 2 big eaters!

I browned the steak then separately fried off the onions, garlic and celery. I then added the spices, peppers, potatoes and , brought to the boil and then simmered for 1 hour. You will probably need more stock if you are to cook this for 6 people.

There was also a small pot of soured cream leftover in the fridge which just had to be added just before it was served. --Chef 18:42, 26 September 2010 (BST)