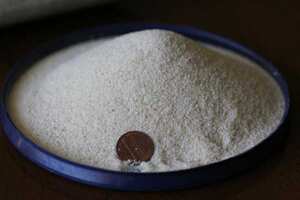 Semolina with a 19mm coin 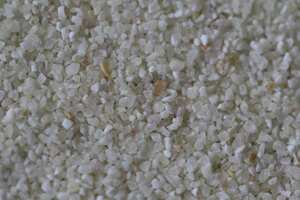 Semolina is the cracked endosperm of wheat which is produced during the commercial milling process and is subsequently ground into flour. However, although most of the semolina produced is milled into flour, a small percentage of the output is sold as a food item.

There are two main types of semolina sold on the general market. Durum semolina, made from hard wheat and soft wheat semolina, also known as farina or by the trade name Cream of Wheat, is used as a hot breakfast cereal and for desserts such as semolina milk pudding. In North India, semolina is known as suji; in South India, rava.

Semolina made from durum wheat or other hard wheats (that are easier to grow than durum) is yellow in colour. It is usually prepared with the main dish, either boiled with water into a pasty substance, e.g. as gnocchi (in Italy), or as the basis for dried products such as couscous (North Africa), and bulgur (Turkey and the Levant). Couscous is made by mixing roughly 2 parts semolina with 1 part durum flour.

Semolina from softer types of wheats is almost white in colour. In the United States it has come to be known by the trade name cream of Wheat. The particles of are fairly coarse, between 0.25 and 0.75 millimetres in diameter. When boiled, it turns into a soft, mushy porridge. This semolina is popular in North Western Europe and North America as a dessert, boiled with milk, and sweetened called semolina pudding. It is often flavoured with vanilla and served with jam.

More broadly speaking, meal produced from other grains may also be referred to as semolina, e.g. rice semolina, or corn semolina (more commonly known as grits in the U.S.)

In South India, semolina is used to make such delicacies as rava dosa and upma, as well as sweets such as suji halwa. A popular dessert in Greece ("Halvas"), Cyprus ("Halouvas"), Turkey ("Helva"), Iran ("Halva"), and by Arab countries ("Halwa") is sometimes made with semolina scorched with sugar, butter, milk and pine nuts. In some cultures, it is served at funerals, during special celebrations or as a religious offering. In much of North Africa and the Middle East, durum semolina is made into the staple couscous.

Semolina can be used as an alternative to corn meal to flour the baking surface of muffins etc. to prevent sticking. In bread making, a small proportion of durum semolina added to the usual mix of flour produces a tasty crust.

One frequently reads, or hears on food shows that "pasta is made from durum semolina" or "pasta is made from semolina flour". Both of these statements are specious to some extent. It is impossible to make a pasta or dough from semolina. The granules will not stick together when water is added to it. All semolina must first be ground into flour before it can be made into a dough, and all commercially produced flour, at this time in history, begins as semolina which is produced as part of the milling process. Therefore all commercial flour, of any colour or wheat type, is 'semolina flour' unless it is ground directly from the wheat kernel which is seldom the case. Before the introduction of modern milling methods however, the harder portion of the endosperm would resist the action of the millstones and this would be collected and was called semolina. Having a higher gluten content than the softer parts of the endosperm, the flour made from it was ideal for making pasta because it maintains its integrity better when cooked in boiling water. It is important to make this distinction to prevent confusion.

How much does one cup of semolina weigh?