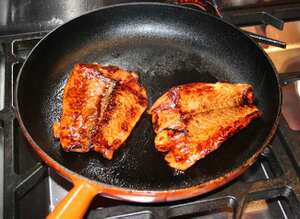 Searing (or pan searing) is a technique used in grilling, roasting, braising, sautéing, etc. that cooks the surface of the food (usually meat, poultry or fish) at high temperature so that a caramelized crust forms. A similar technique, browning, is typically used to sear or brown all sides of a particular piece of meat, fish, poultry, etc. before finishing it in the oven. To obtain the desired brown crust, the meat surface must exceed 300 °F (150 °C), so searing requires the meat surface be free of water, which boils at around 212 °F (100 °C).

It is commonly believed that searing locks in the moisture or "seals in the juices" of the food. However, it has been scientifically shown that searing results in a greater net loss of moisture versus cooking to the same internal temperature without first searing. Nonetheless it remains an essential technique in cooking meat for several reasons:

Typically in grilling the food will be seared over very high heat and then moved to a lower-temperature area of the grill. In braising, the seared surface acts to flavour, colour and otherwise enrich the liquid in which the food is being cooked.