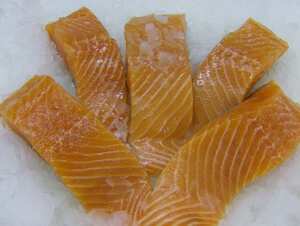 PGI Scottish Farmed Salmon must be typical of the species, Salmo Salar (Atlantic salmon). It has a consistent shape. The fish must have a rounded ventral body surface when viewed laterally and the body wall musculature should show no significant tendency to collapse when carcass is eviscerated. Scottish farmed salmon have an iridescent appearance and are silver in colour. The flesh colour must have a minimum intensity of 26 on the Roche Scale. Scottish farmed salmon are firm with a fibrous to smooth to even texture and have a consistent flavour due to the rapid chilling post harvest.