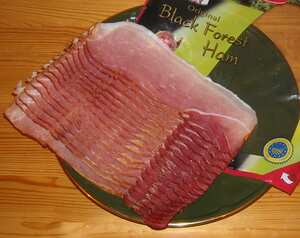 The production of Schwarzwälder Schinken can take up to three months. Raw ham is salted and seasoned with garlic, coriander, pepper, juniper berries and other spices. After curing for two weeks, the salt is removed and the ham cures for another two weeks. Then the ham is cold smoked at a temperature of 25°C (77°F) for several weeks, during which time the ham acquires its deep red colour. The smoke is created by burning pine brush and sawdust, and this smoking process gives the ham much of its rich flavour.

Schwarzwälder Schinken has a very pronounced flavour and is common in German cuisine. It may be eaten fresh, for example on bread or with fruit, or used as an ingredient in cooked dishes.