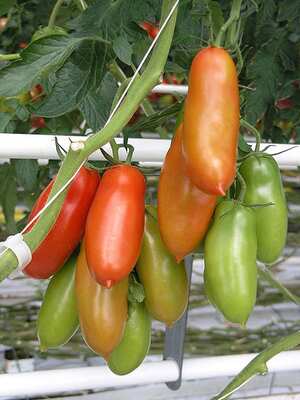 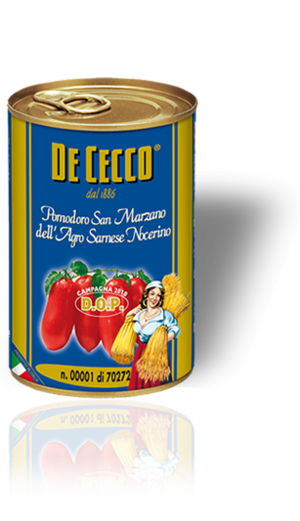 Characteristics of the fruit of the fresh product suitable for "peeling" processing:

A) prevalently bilobate fruit, typical elongated parallelepiped shape, length of 60-80 mm measured from the peduncle to the style cicatrix;

B) axes ratio: not less than 2.2 +/- 0.2 (measured from the longitudinal axis and the greatest transversal axis in the equatorial plane;

C) absence of a peduncle;

H) refractometric residue at 20oC equal to or greater than 4.0%;

I) limited presence of thickened vascular bundles in the petiole area (taproot).

After processing and canning, the fruits must have the following requisites:

A) red colour, reasonably uniform, with an a/b ratio not less than 2.2;

B) absence of foreign flavours or odours;

C) absence of parasite larva or parasitic alterations consisting of necrotic spots of any size in the pulp.

Absence of internal decay along the style axis;

D) drained product weight not less than 65% of net weight;

E) the tomato fruits must be whole and in any case must not present lesions which alter their shape and volume, for at least 70% of the weight of the drained product for containers with a net content of 400 g or less, and for at least 80% for all other containers;

F) net optical refractometric residue at 20oC not less than 5%;

G) mean peel content, determined from out of at least 5 containers, no greater than 2 cm2 for each 100 g of content;

H) mould value of preserved tomatoes (tomatoes and packing medium) must not be greater than 0.4 g/Kg;

M) the addition of table salt up to a maximum 3% of net weight is allowed;

It is well-known that the first tomato to be used for "peeled tomato" production was the tomato called the "San Marzano", formerly also known as the "Long", due to the shape of the fruit.

Historical documents prove that it was in a district of the Agro Sarnese-Nocerino area that, due to mutation or to hybridization between local types of tomatoes, the famous tomato with an elongated fruit came into being. It was given the name "San Marzano", since it was grown mostly in the area of the commune of San Marzano sul Sarno in the province of Salerno.

The "peeled tomato" industry has always been the pride of Campania, thanks to the extensive cultivation of the typical local tomato, especially in the Agro Sarnese- Nocerino area, processed at one of the many processing plants which have arisen in the area of origin and cultivation of the "San Marzano", and which has been marketed in Italy and exported to various countries in Europe and America since the beginning of the 1900s.

The peeled tomato designated the "Agro Sarnese-Nocerino San Marzano Tomato" is obtained by using exclusively as a raw material fruits coming from plants of the San Marzano ecotype or improved lines produced in the aforesaid area, using appropriate cultivation techniques. The harvested fruits then undergo processing, which is done at the processing plants located in the same area.

San Marzano tomatoes are grown exclusively in irrigated plains areas of volcanic origin, tending to be uniform and naturally fertile, both from the physicol-chemical characteristics of the volcanic materials as well as from the presence of sufficient quantities of organic matter, which further characterises its high fertility.

The areas reserved for San Marzano tomato growing are generally small plots of land of about 3,000 - 4,000 m2, on the numerous farmer-owned and -operated farms present in the area.

Transplanting is normally done during the first ten days of April, but it may be prolonged until the first days of May.

One typical characteristic of San Marzano tomato cultivation is the vertical growing of the plants, due to the installing of rows of poles and steel wire. This growing method contributes greatly to the obtaining of high quality production, because the fruits do not come into contact with the ground, and remain intact. Furthermore, harvesting takes place completely by hand, in a graduated manner, when the fruits reach complete ripeness. The average yield is about 60-80 tonnes per hectare, and the processed product yield reaches high levels, normally above 70%.

The processing of fresh tomatoes into processed "peeled tomatoes" is done at the canning plants situated in the Agro Sarnese-Nocerino area.

From a production viewpoint, the main stages provided for in the preparing of the industrial product (peeled tomatoes) designated the "Agro Sarnese-Nocerino San Marzano Tomato" are the following:

The soil in the Agro Sarnese-Nocerino area, originating from the eruptions of Somma-Vesuvius and the surrounding Subappennine formations, has physicol-chemical characteristics which make it classifiable as one of the best soils in Italy.

Regarding climate, it should be mentioned that the Agro Sarnese-Nocerino enjoys the beneficial influence of the sea. The temperature range is not very great, and when the temperature drops below freezing, it does not stay there very long. It hails very rarely. The prevailing winds are the mistral from the north and the sirocco from the south.

There is high rainfall in autumn, winter and spring, and little or almost no rainfall in summer. Although there is very little rain in summer, the relative humidity of the air remains rather high. The area is rich in water resources, with numerous springs and large supplies of ground water at various depths.

The whole of the pedological, hydrological and climatológica! factors, as well as the industriousness of the growers, form a basic, exclusive prerequisite which strongly characterises the entire plains area-, dominated at the northwest by the Somma-Vesuvius volcanic complex and to the south by the dolomitic massif of the Monti Lattari, which is identified with the Agro Sarnese-Nocerino.

The geographical link between the "San Marzano Tomato" and its most typical environment, i.e. the Agro Sarnese- Nocerino, is very strong. In fact it is in this particular area that the "San Marzano Tomato" had its origins and has been most widely grown, on small farms, and it is in this same environment that it has traditionally been processed into "peeled tomatoes". And it is from this land that this processed product has reached and brightened the tables of hundreds of millions of consumers over the decades throughout the world.