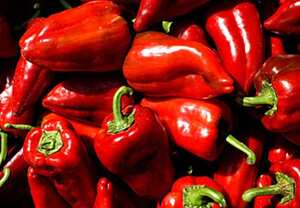 Pimiento Riojano is a sweet pepper from the La Rioja region of Spain.

The specific characteristics of the variety are as follows:

Pimiento Najerano: Registration: 06/85 â Re-registration: 07/96. Variety Indigenous to Rioja, where it is grown almost exclusively. On account of their shape, the fruits belong to the C3 type under the Pochard classification. They are cone-shaped peduncles tapering to a point.

Surface is slightly coarse, the fruit has two or three lobes and ranges from 16 to 18 cm in length and 6 to 8 mm in width. Flesh is medium-thin. Placental tissue is limited. The average weight of the fruit is average to high, between 225 and 300 gr. Colour is deep red when ripe.

The fresh peppers belong to the 1st Category; they are smooth, without blotches and their development and degree of ripeness must be such as to allow them to withstand handling and transport and fulfil, at the place of destination, the relevant commercial and industrial requirements.

The pimiento entreverado, which is typical and much appreciated in the area for its mild flavour and the fact that it is easily digestible, is also covered by the designation and, together with the red and green peppers, constitutes a high-quality product.

Canned Rioja peppers covered by the designation belong to the Extra Class and contain green, red and entreverado peppers, uniform in colour, without yellow patches, presented in chunks or strips (not less than 1 cm wide), with a firmness of 90 % and an average of six seeds per piece or per 100 g of strained product and 1 cm2 of burned flesh per piece or 100 g, packed always in their own juice, without any covering liquid.

The production area is the same as that for canning, processing and packaging and is made up of the municipalities belonging to the districts of Rioja Alta, Rioja Baja and Rioja Media.

The peppers supplied must come from holdings and/or plots, cold stores and plants located in the protected geographical area which produce peppers of the Najerano variety and are listed in the relevant register of the Asociacion Profesional de Productores de Pimiento Najerano y Santo Domingoâ (Trade Association for Producers of Najerano and Santo Domingo Peppers). In addition to being subjected to their own checking systems, these holdings, plots, cold stores and plants also have to undergo external checks carried out by the Consejera de Agricultura GanaderÃ­a y Desarrollo Rural (Council for Agriculture, Stockfarming and Rural Development) with the help of technicians from the Instituto de Calidad Agroalimentaria de La Rioja (ICAR) (La Rioja Food-Quality Institute) or by an External Inspection and Certification Body employed by the Association and recognised by the competent authority (Consejer­a de Agricultura, Ganader­a y Desarrollo Rural del Gobierno de La Rioja â Government of the Rioja Ministry of Agriculture, Stockfarming and Rural Development) as complying with standard UNE EN 45.004, with a view to verifying that the peppers covered by the designation fulfil the requirements of the Regulation. At the end of this checking process, it is ICAR which is responsible for the certification of the product.

All the peppers, whether intended for consumption in the fresh state or for processing, are grown on plots or holdings listed in the register of the Asociacion Profesional de Productores de Pimiento Najerano y Santo Domingoâ and are processed and packaged at cold stores or plants listed also in that register. Hence, in order to safeguard quality and guarantee the traceability and inspection of the protected product, production, intake, processing and packaging must take place in the defined geographical area.

Moreover, the farmers select their own seeds from amongst the best plants and then take them to approved nurseries, ensuring in this way varietal authenticity, improvement and distinctiveness of quality, as well as origin.

Harvesting takes place when the fruits are considered to have reached their required degree of ripeness and involves as many runs as required. It is always performed by hand and with the greatest care to ensure that fruits of excellent quality are obtained. First to be selected are peppers of Class I, sound, fresh, well-developed, free from chilling injury and unhealed cracks, without sunburn and with stalks attached, the peppers of lesser quality and smaller sizes, which are not covered by the designation, being left for the last runs.

The harvested peppers are transported to the store for handling in trailers or rigid containers so as to prevent them being crushed.

Unloading is carried out in such a way as to minimise the risk of products falling to the ground.

Stores are all equipped with systems to ensure that the peppers belonging to the 1st category, i.e. those to be covered by the protected geographical indication, are unloaded separately from others, so preventing different qualities from being mixed during subsequent handling.

Storage rooms must be properly ventilated and have the required relative humidity and temperature.

Packaging of fresh products must be undertaken by hand and always with the utmost care so that the physical, chemical and organoleptic qualities peculiar to the harvested peppers are kept intact; the fruits which have suffered damage during storage are rejected.

These are based on: ultra-careful selection, cooking with a direct flame, peeling and removing membranes and seeds by hand without washing or submerging fruits in water or chemical solutions, packing without covering liquid, and using almost no citric acid to prolong the product's shelf life. In this way the product keeps its aroma, its flesh retains its consistency and digestibility is enhanced.

Production, intake, processing and packaging must take place in the defined geographical area in order to safeguard quality and guarantee the traceability and inspection of the protected product.

Already in 1856, the canned peppers of Rioja were famed for their excellent quality â the result of preparing peppers by toasting their skin rather than resorting to peeling them using caustic soda. From 1876, the âPimiento Riojanoâ was being eaten everywhere in the country and this typical Rioja fruit was even acquiring a world reputation, with canning plants exporting far and wide.

Later in 1930, the Pimiento Riojano became a leading product in trade both within our Autonomous Community and at national and international level, with substantial exports to the United States.

Moreover, the reputation which the Pimiento Riojano has enjoyed and continues to enjoy in our Autonomous Community and throughout the country is attributable to its age-old culinary use. All the dishes described as a la Riojana are based on the chilindrn (a mixture of tomatoes and peppers). The chilindrn has also contributed in Rioja towards the development of the canning industry. Canned peppers evoke the characteristic smells of our villages, the penetrating aroma of grilled peppers outside the doorways of houses, the painstaking work of roasting, peeling, stuffing and cooking them â not to mention the multitude of villages in Rioja where the fronts of houses are decked with strings of peppers drying in the sun.

In the Practicn, it says that Rioja's reputation for growing peppers is well-deserved. Also in 1929, Doctor Thebussem referred to Najera peppers âas one of the tastiest warm dishes in Spainâ and to Rioja peppers generally âas one of the food products Spain can display with success (in his opinion) at national and provincial exhibitionsâ.

The mean average temperature of 13,9 °C, high luminosity (2,238 hours of sunshine), virtual absence of spring frosts and gradually rising temperatures as spring progresses favour a slow ripening process in the Rioja pepper, giving rise to a gradual increase in carotenoids and xantophylls, which give the product a balanced aroma and flavour as well as the distinctive colour of the Najerano variety, i.e. a homogeneous entreverado, where the fruit is prevented from

The protected geographical area has a large diversity of morphological units and soil types, but the cultivation of the Pimiento Najerano is at its best in areas close to the Ebro Valley. These are areas with gentle landforms, comprising plains and wide, gently sloping valleys and some isolated hills through which the tributaries of the Ebro have trenched deep valleys before reaching extensive and fertile plains. Erosion by the Ebro has deepened the beds of the tributaries of that river and given rise to the accumulation of large alluvial deposits, such as phosphorus, potassium, lime, sulphur and other micro-elements including boron, magnesium and molybdenum, which are all important for pepper cultivation.