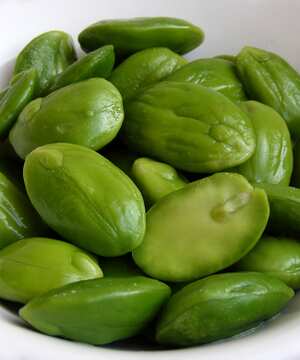 Peteh, Petai, bitter bean ,sataw, twisted cluster bean, yongchaa, yongchaak, zawngtah or stink bean (Parkia speciosa) is a plant of the genus Parkia in the family Fabaceae. It bears long, flat edible beans with bright green seeds the size and shape of plump almonds which have a rather peculiar smell, characterised by some as being similar to that added to methane gas.

Peteh beans are best when combined with other strong flavoured foods such as garlic, chilli peppers, and dried shrimp, as in sambal petai or added to a Thai curry such as Thai Green Curry of Duck. When young the pods are flat because the seeds have not yet developed, and they hang like a bunch of slightly twisted ribbons, pale green, almost translucent. At this stage they may be eaten raw, fried or pickled. Young tender pods with undeveloped beans can be used whole in stir fried dishes. In North-eastern India, the seeds or the bean as a whole are eaten by preparing a local delicacy call Iromba or Yongchak singju. Seeds are also dried and seasoned for later consumption. When dried the seeds turn black. In Indonesia, petai is very popular in the highlands of Java.

Petai beans or seeds look like broad beans. Like mature broad beans, they may have to be peeled before cooking. Petai has earned its nickname 'stink bean' because its strong smell is very pervasive. It lingers in the mouth and body. Like asparagus, it contains certain amino acids that give a strong smell to one's urine, an effect that can be noticed up to two days after consumption. Like other beans, their complex carbohydrates can also cause strong-smelling flatulence.